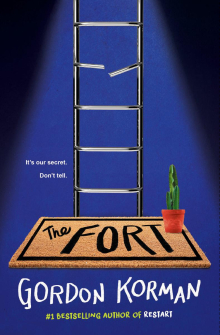 What if you found a place nobody else knew about? The morning after Hurricane Leo rips through their town, Evan, Jason, Mitchell, and C.J. find a total mess outside, with downed branches and uprooted trees everywhere. They know they should stay indoors, but the urge to go exploring is just too great...


"I try to make my characters funny or exciting because writing a novel is almost like living with those characters for a few months. I certainly wouldn’t want to spend so much time hanging out with boring characters – and I don’t think anybody would enjoy reading about them."

Gordon Korman is the author of 100 middle-grade and young adult books! He has had multiple books reach #1 on the New York Times bestseller list and has received countless awards and honours. His books have sold over 30 million copies and have been translated into more than 30 languages. Each year, Gordon travels extensively, visiting schools and libraries, bringing his trademark humour and adventurous style to readers everywhere.


But how did it all begin?

Gordon wrote his first book when he was twelve years old. "It wasn't on purpose," Gordon says. "In my school, the track and field coach had to teach language arts, and for writing, he just told us to work on whatever we wanted for the rest of the year."

As the class monitor for Arrow Reading Club, he sent his manuscript to Scholastic Canada. This Can't be Happening at Macdonald Hall! was published in 1978, when Gordon was fourteen! The Macdonald Hall series went on to encompass seven funny books that are still popular today.

The publishing process was not all glamour for Gordon when the first book was published. "I was thrilled with the way it came out. But you have to remember what it was like to be a preteen. From the day I signed that contract to the day it came out we’re looking at close to a year and a half. I expect it to take that long now, but that was forever for me then. I was practically sick of it."


What is the secret to Gordon's success?

"It's a combination between real life and pure imagination," he states. "I always start off with something real, but then I unleash my imagination to make it more exciting, funnier, or a better story. To be honest, by the time a book is done, you can't recognize much of the real-life part. It's been changed too much. But I never could have gotten there without it."

With the publication of the Island trilogy in 2001, Gordon made the leap from humour to suspense. "It was a real challenge for me because I had to switch gears from comedy to action/adventure," says Gordon. "Here were six shipwrecked kids who were in real danger of dying every minute. That's not the time to be cracking jokes. So it's not humour that keeps the reader turning pages; it's suspense and fear." Writing part of a multi-author multi-platform series, The 39 Clues, was also a new and ground-breaking experience for Gordon.

While Gordon’s books are always very funny, many also explore themes that are relevant to young people today: from sports injuries in Pop! to prejudice and hate crimes in Linked.


Why does Gordon love writing for middle-graders?

He says it’s because this is the time when kids start forming own opinions. "Middle graders decide what they like—and what they don’t—and it has nothing to do with your teacher’s preferences or those great voices your mom does when reading aloud. I think that’s why so many adults who grew up with my books reach out to me on social media. The choices you make as a middle grader stay with you forever." — Publishers Weekly

Gordon Korman was born October 23, 1963 in Montreal, Quebec, and grew up in Thornhill, Ontario. Gordon moved to the United States as a student in the film and film-writing department at New York University. He now lives with his wife and children on Long Island, NY.

Be sure to keep up with the latest by Gordon Korman. See all the books!

Copyrights: © Gordon Korman
Back To Top