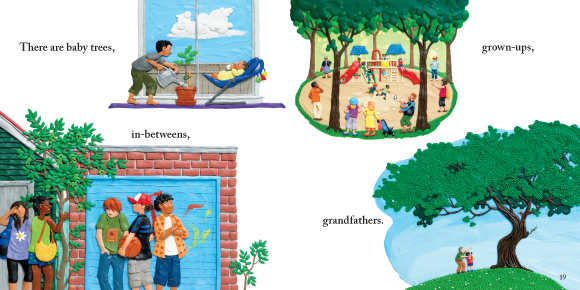 Picture a tree — what do YOU see?

Picture a tree, from every season, and from every angle. These wondrous beings give shade and shelter. They protect, and bring beauty to, any landscape.

A tree's colours both soothe and excite. Its shape can ignite the imagination and conjure a pirate ship, a bear cave, a clubhouse, a friend; an ocean, a tunnel, and a home sweet home. Its majestic presence evokes family, growth, changes, endings and new beginnings.

Picture a tree — what do you see? The possibilities are endless.

In this gorgeous new picture book, Barbara Reid brings her vision, her craft, and her signature Plasticine artwork to the subject of trees. Each page is a celebration, and you will never look at trees in quite the same way again.

Praise for Picture a Tree

"Another bravura performance from Reid."
—The Globe & Mail

"From the opening flyleaves to the last page, Picture a Tree is a marvel of sharp observation, appreciation and playfulness . . . Excellent."
—The Toronto Star